Anxiety is one of the most obvious symptoms of stress, and any form of relaxation will have some effect, but the effect of true transcending appears to be at least twice as large as the ordinary relaxation that other techniques can offer.

This was the conclusion from Researchers from Stanford University who did the largest meditation review that was ever performed, calculating the effectiveness (effect size) of all the meditation techniques that have ever been researched, over a total of 146 studies.

The conclusion was that, on average, no meditation technique could show a larger effect than placebo (just sitting with the eyes closed. Concentration techniques even had a negative effect on anxiety, as it requires so much effort that there’s hardly any relaxation at all.

The average effect of 35 TM studies did show a significantly larger effect, twice as big as any other method ever researched. TM was also the only technique where the effect improved with longer practice, showing an accumulation of positive effects.Ref.Journal of Clinical Psychology,45 (6): (957–974)

Self-actualization measures to what degree people can be themselves throughout different circumstances. The more self-actualized, the less we get overshadowed by problems, and the more succes we’ll have in life. (see being yourself) American psychologist Maslow described how self-actualization will normally not grow beyond adolescence, but that certain experiences, which he called “peak experience” can cause it to grow independent of age. Descriptions of these “peak experiences” closely match descriptions of transcending. As such it could be expected that ordinary relaxation will not have such a big effect.

This was confirmed by a comparative analysis of 42 meditation studies. The average effect size of all other meditation techniques that were researched was only 0.2, which is considered to be a small effect. The effect size of TM, on the other hand was close to 0.8, which is considered a large effect. TM is 3 to 4 times as effective as any other meditation technique ever researched (p=.0002)Ref.Journal of Social Behavior and Personality, 6, 189–247

Alcohol addictions usually are deeply ingrained, both in our bodies as in our psyche. To effectively treat addictions also requires a profound change, far deeper than what ordinary relaxation can achieve. 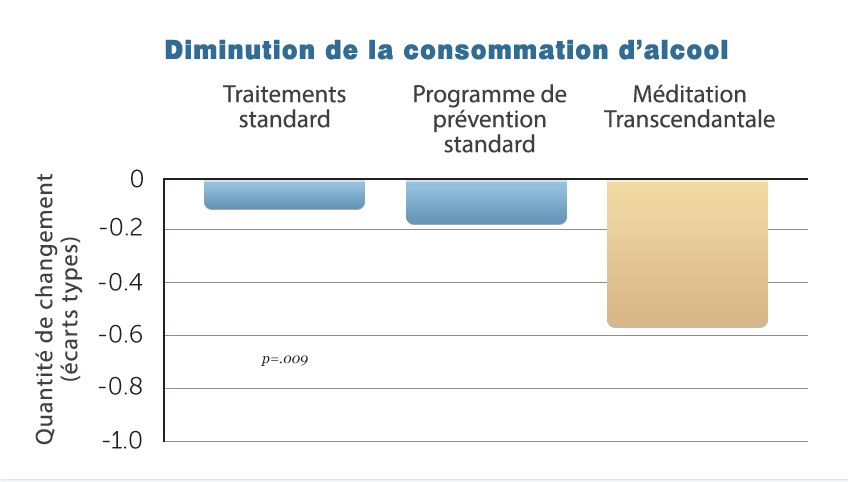 The average effect of 14 TM studies (with 4000 participants in total) was 2 to 4 times as big as any other method ever researched.  (p=.009). However, when researchers only took into account the serious users, people with a severe alcohol addiction, the effect was 4 to 10 times as big. As with other research, the more regular TM meditators were in their practice and the longer they practiced, the larger the effect.Ref.Alcoholism Treatment Quarterly, 11, 13–88 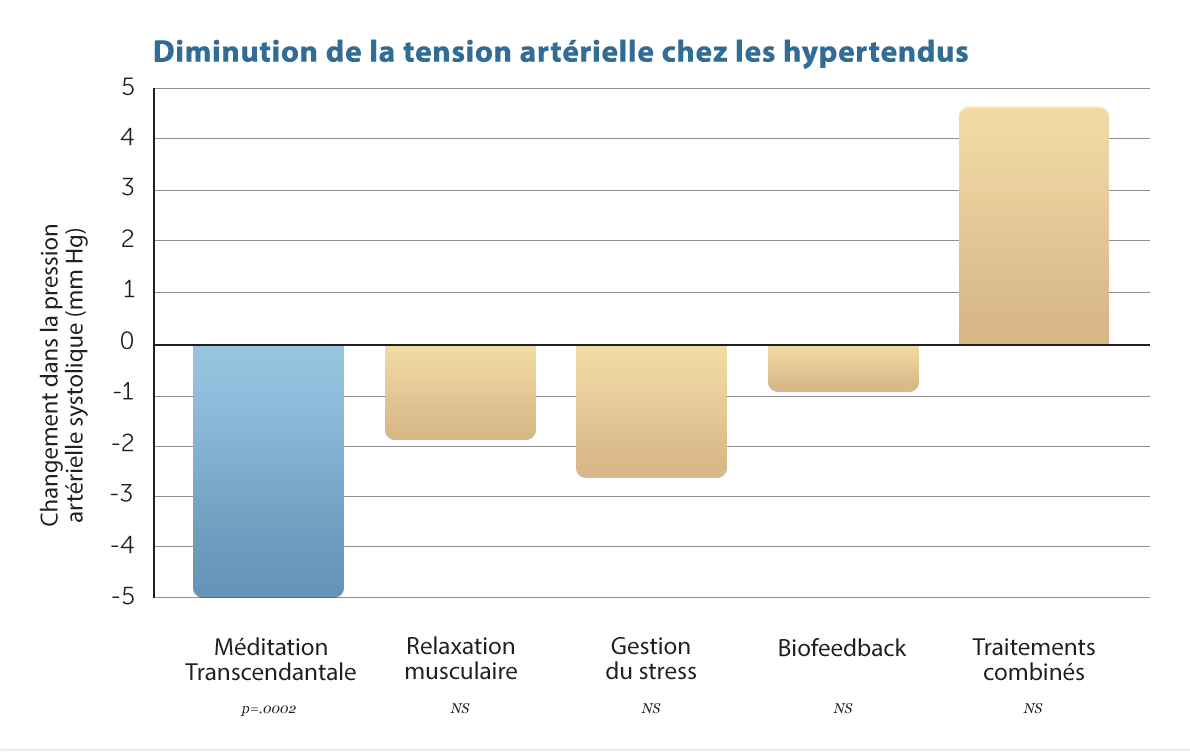 In 2007 the U.S. National Institute of Health commissioned an analysis of the effectiveness of alternative methodes to decrease hypertension.

Transcendental Meditation was the only method that showed a significant effect. As a result of this and other studies the American Heart Association recently published an advice to doctors that TM can be prescribed as a clinical treatment for hypertension. All other meditation techniques (including Mindfulness and Yoga) were not recommended due to lack of consistent proof that it works.Ref.Current Hypertension Reports 9: 520–528, 2007

Intelligence and creativity are directly related to how integrated different parts of our brains can function as one unified whole. Transcending will enhance this integration, as it is essentially an experience where the entire brain becomes unified. Ordinary relaxation will not have much, if any, effect. 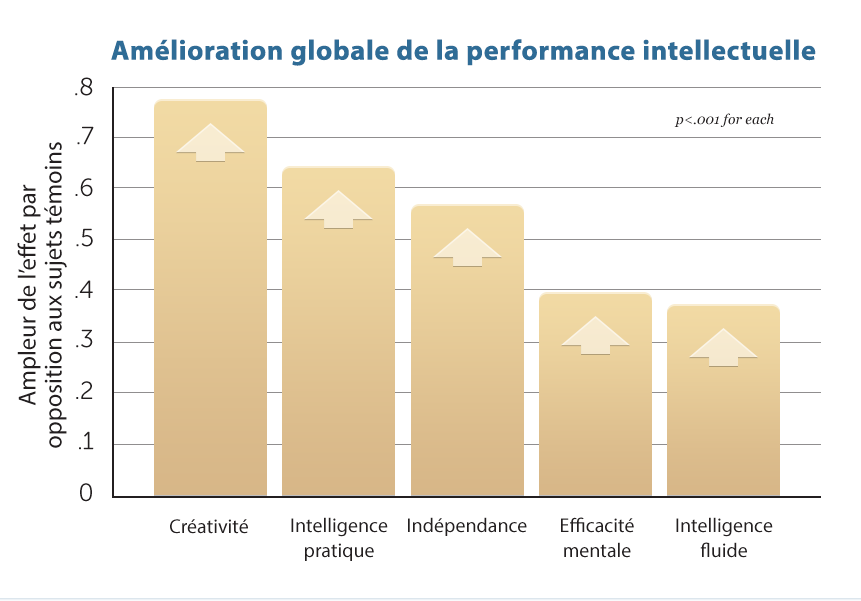 This was confirmed by an analysis of 3 studies with a total of 362 school children. They were randomly divided into a TM group and control groups who learned a contemplation meditation, just sat with eyes closed or did nothing. After 6 to 12 months the TM group showed a highly significant increase compared to the 3 control groups in all 5 measures of effective brain functioning: whole brain creativity (p=.0000000008), Field Independence (p=.0000004), practical intelligence (p=.00009), mental efficiëncy (p=.0003), and “Fluid intelligence” (p=.001). They also showed significantly reduced stress and anxiety.Ref.Intelligence 29: 419–440, 2001 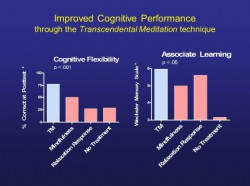 A group of elderly people, with an average age of 81, were randomly divided in 4 groups: TM, Mindfulness, a mental relaxation technique (relaxation response) and a control group. After 3 months the TM group showed a significant increase in cognitive abilities and a significant decrease in hypertension compared to the control groups. 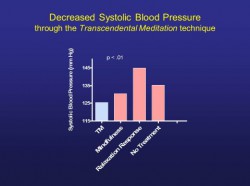 After 3 years the 4 groups were again investigated. In the control groups a large number of people had already died (12% Mindfulness to 35% bij Relaxation response), whereas in the TM group 100% was still alive. 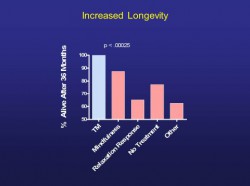 At another checkup 7 years later there was no longer any significant difference between mindfulness and the other control groups, only the TM group showed a difference. On average they lived 2 years longer than the other 3 groups.

The research also showed that TM meditators found their practice far more enjoyable than those who practiced Mindfulness.

More detailed comparison of the long term effects between TM and Mindfulness.